Of all the plants I see on my excursions through the forest, I think some of the most beautiful to me are among the most primitive — ferns.  With origins going back anywhere from 300 to 400 million years, ferns have been around as long as reptiles and were spreading across the planet at least 100 million years before mammals arrived.  By contrast, the primates only showed up about 60 million years ago, and the species we know as modern human beings have only been here for about 250,000 years. 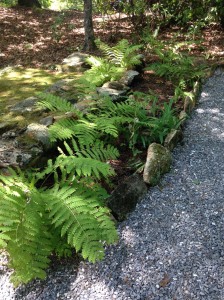 Today, there are literally thousands of species of ferns growing in various habitats all around the world.  They flourish mainly in places where flowering plants can’t grow because it is too wet or too shady.  In other words, they have evolved to take advantage of habitats that the more dominant seed-bearing plants can’t handle.  Instead of becoming extinct, they adapted. There seems to be a philosophical message there.

I think my attraction to ferns comes from the delicate fronds that are characteristic of so many of the species.  In America, they are often found in shady, moist places that are cooler then the surrounding area, and their lush, green color implies fertility and vitality.  The way they pulsate with the slightest breeze has such a calming effect on me.  Apparently, my interest in ferns is shared by quite a few folks in this country, illustrated by the existence of an organization devoted to studying the plants.  You can find out so much more information about ferns at the website of the American Fern Society.