In his Pulitzer-prize-winning book, Slavery by Another Name: The Re-Enslavement of Black Americans from the Civil War to World War II, historian Douglas Blackmon brings to light one of the most shameful chapters in American history—an “Age of Neoslavery” that thrived from the aftermath of the Civil War through the dawn of World War II.  Having been raised in the Southeast where these atrocities flourished in the decades leading up to the time I was born in 1960, reading this exposé was both painful and illuminating for me — it is one of the best works of nonfiction I have read in many years. 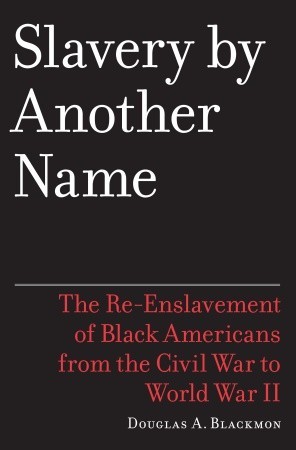 Under laws enacted specifically to intimidate blacks, tens of thousands of African- Americans were arbitrarily arrested, hit with outrageous fines, and charged for the costs of their own arrests. With no means to pay these ostensible “debts,” prisoners were sold as forced laborers to coal mines, lumber camps, brickyards, railroads, quarries, and farm plantations. Thousands of other African-Americans were simply seized by southern landowners and compelled into years of involuntary servitude. Government officials leased falsely imprisoned blacks to small-town entrepreneurs, provincial farmers, and dozens of corporations—including U.S. Steel—looking for cheap and abundant labor. Armies of “free” black men labored without compensation, were repeatedly bought and sold, and were forced through beatings and physical torture to do the bidding of white masters for decades after the official abolition of American slavery.

This book is a moving, sobering account of a little-known crime against African-Americans, and the insidious legacy of racism that reverberates today.  In light of events involving law enforcement and the legal system with regard to black people over the past year, this book is extremely relevant.  It should be required reading in most southern history college courses, and it should be considered strongly for most advanced American history courses. It is well researched, thoroughly documented, and extremely compelling.  Blackmon is such a good writer.