Since starting this blog over a year ago, I have written several posts about waterfalls my family has visited in recent years.  I am attracted to water.  Some of my best memories from childhood through the present involve vacations at the beach, tubing down rivers, kayaking on ponds and lakes, and swimming in pools.  There are very few sounds that are more calming to me than waves crashing against the shore.  I love the music that water makes as it moves in nature — creeks, rivers, cascades, and falls.  I like how water divides land, how it reflects the sky and sparkles like diamonds with bright sunlight.  It is cliche to say that water is the source of life, and yet it is an indisputable fact that life on this planet would be impossible without water.

My appreciation for the gifts of water led me to begin contemplating about ten years ago how I could incorporate water into my garden.  I had seen ponds at homes and in public places, but I had never thought about creating one for myself.  Then I got divorced.  When such an emotional life-changing event occurs, some people turn to abusing alcohol, taking drugs, or other reckless behavior.  But, I have two sons who were both teenagers when my marriage ended.  They needed me to be sober, responsible, and engaged in their lives as much as possible within the limits imposed by the breakup.  Besides, addiction is not a problem for me, nor is it how I combat stress, anger, sadness, or any of the other strong feelings that accompany the dissolution of a marriage.  I needed a distraction, something that could occupy my mind and muscles while getting me out of the house.  So I started digging a hole in the backyard.

It took me several days just to dig the hole, and almost that long to get the sides level.  I read books.  I watched videos.  I drew pictures and diagrams.  I had a fairly steep embankment running down the side of my house (I ended up keeping our house) that extended into the fenced back yard and somewhat leveled out beside the posts of the back deck.  I envisioned a cascading waterfall built into the bank, where I had planted an assortment of shrubs several years earlier.  I consulted with a local landscape supply store about liners, flex hose, pumps, skimmers, and rocks.  The rocks I purchased were generally no larger than a honey dew melon, and I didn’t have a lot of money left after buying the mechanical supplies.  My property was bordered in the back by woods and a small creek.  Fortunately, my younger son was quite enthusiastic about the project as it developed, and was more than willing to help me drag rocks from the creek bed and up the hill to the pond site.  We moved a LOT of rocks, some of which were quite large.  My back will never be the same.  It took several weeks to finish, but the end product was really beautiful.  I even bought a few fish to complete the package.  Furthermore, the process of building the pond gave me the distraction I desperately needed and an opportunity to spend some quality time with my young teenager when he really needed my attention.

When my second wife and I got married, I moved in with her to a house located on a Georgia Power Company lake.  Even before we got married and I moved away from my house, I was already missing my pond.  Of course, there were several million gallons of water within a stone’s throw of our back door, and we had huge, clear windows looking out on the large cove where we lived.  I could fish in our back yard, climb onto a jet ski right off our dock, and go swimming without leaving home.  We were planning to get married on the patio looking out over the lake, and I was determined the sound of running water was going to be the music for our ceremony.  I went to work a couple of months before the wedding.  This time, I didn’t have a steep slope to work with, so I created a small “hill” for a waterfall using the dirt I removed for the pond.  The setting didn’t look as natural as the first pond, but I was able to landscape and plant sufficiently around the perimeter to make this second pond attractive.

Now we have left the lake house behind, along with our former jobs, and have moved to live and work in the north Georgia mountains.  I’m not sure my body could have taken the punishment of building a third pond.  It is quite grueling, especially digging the hole and then hauling and positioning the rocks.  But my wife and I both love water.  We seek it when we go on hikes.  We soak it up when we make our annual trips to the coast.  We spend many hours during the warmer months on nearby lakes cruising around in our kayaks.  We needed water at our new home, but there were no streams in sight of our property.  So we splurged.  We hired someone to build a pond and a waterfall for us at our new home.  It took the better part of a summer, but our contractor is an artist.  He took great care preparing the location behind our house, even though we were certain there wasn’t enough room for the size project we had in mind.  He made it fit, and he made it magnificent.  Once again, we are mesmerized by the sound of a cascading waterfall for at least seven months out of the year.  True, this third pond doesn’t look quite as authentic or natural as the smaller ones I created, but it has most certainly exceeded all our expectations. 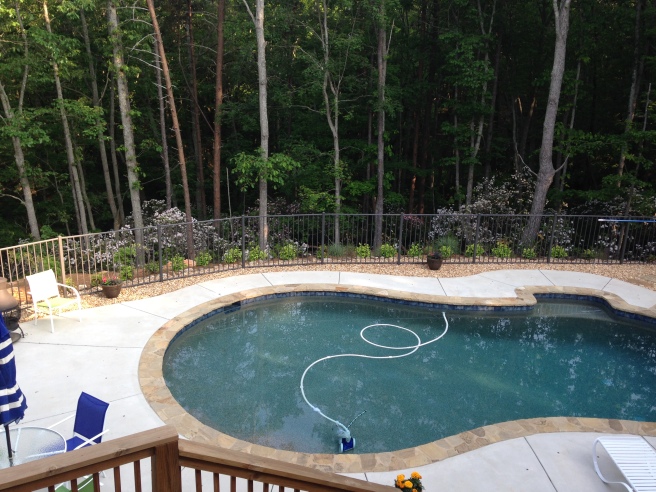 3 thoughts on “Building Ponds and Waterfalls”